﻿**Temptation of the Flesh is now in its final draft stage and will be published soon. Unfortunately, that means it's not available to read as a draft at the moment. But it's coming - yes - it is.** 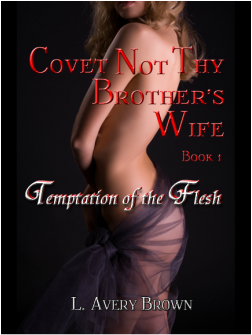 Emily Cavanaugh, 24, though she’d never find love. Then love found her and threw her into a tailspin when she fell for two men – brothers. Boston Boys who were as different as night and day. And they both wanted the beautiful, young woman from South Carolina. Only they wanted her for entirely different reasons.

Thomas Fitzpatrick, 33, knew early on that Emily, the daughter of wealthy and somewhat cold parents, was desperate to be loved. She’d had experience on both sides of the aisle while in college but was still naïve and impressionable so far as sex went. But her desire to be loved allowed him to introduce Emily to his preferred bedroom lifestyle in a calculated way. Thomas was a strict lover who doled out intimate punishment all for the sake of enhancing the bedroom experience. He tied up her heartstrings as well as her hands with I adore you,you're wonderful, and I love you as he made harsh, punishing love to her.

Emily enjoyed some of his hard sex-play at first but after a while, Thomas's reindeer games went too far and became abusive. And when she begged him to stop, Thomas would say, ‘There’s begging and then there’s begging. I’ll stop when you get there, Em.” And Emily gave in because he said he loved her for her. When he popped the question, she accepted even though she was reluctant. At least he loves me. Love grows, right? Marriage will tame him.

Then she met Adrian, Thomas's older, taller, sexier, kinder, gentler brother with soul-piercing blue-green eyes, which worked well for him, as he was a priest. Father Adrian. And meeting him turned everything the good Southern Baptist girl thought she knew about desire, passion, and love on its ear. Thoughts of Adrian filled her head when Thomas made his version of love to her. And she thought of handsome priest when she made love to herself praying he'd notice her and want her like she wanted him.

Fr. Adrian Fitzpatrick, 35, was enamored with Emily before ever meeting her in the flesh. The good father was so mesmerized by her, he slyly airdropped the album Thomas had made of her onto to his phone. Looking at her gave Adrian something to enjoy as he sat in his plain, lonely room at the rectory. And when he scrolled through his hiddent stash of Emily photos, he couldn’t resist the urge to satisfy his desire to find release. Emily was his fantasy and Adrian couldn't wait to meet her in the flesh.

Their attraction was immediate but ill fated. Emily was the woman Adrian could never have because of his vow to The Church and because of Thomas. But to be honest, Adrian probably would have shaken the Devil’s hand for the opportunity to kiss her. Hell, he probably would have blown the Beast if it meant he could screw her.

Emily wished she’d not agreed to marry Thomas. But she did. She wished Adrian wasn’t a priest. But he was.

In the 11th hour, they came together and gave into the temptation of the flesh and had one powerful, heated, passionate moment.

But was it enough? Or was it too late?
Covet Not Thy Brother's Wife, Book 1